In yet another ‘probably-useless-but-interesting’ hobby project, I wrote a Forth compiler and interpreter targeting WebAssembly. It’s written entirely in WebAssembly, and comes with a compiler that dynamically emits WebAssembly code on the fly. The entire system (including 80% of all core words) fits into a 10k (5k gzipped) WebAssembly module. You can try it out here, or grab the code from GitHub.

What follows are some notes on the design, and some initial crude speed benchmarks.

Forth is a low-level, minimalistic stack-based programming language. It typically comes in the form of an interactive interpreter, where you can type in your commands. For example, taking the sum of 2 numbers and printing the result:

Forth environments also have a compiler built-in, allowing you to define new ‘words’ by typing their definition straight from within the interpretter:

which you can then immediately invoke

Not unlike Lisps, you can customize Forth’s compiler, add new control flow constructs, and even switch back and forth between the interpreter and the compiler while compiling.

Because of its minimalism, Forth environments can be easily ported to new instruction sets, making them popular in embedded systems. To learn a bit more about this language (and about WebAssembly), I wanted to try creating an implementation for WebAssembly – not exactly an embedded instruction set, but an instruction set nonetheless.

WAForth is (almost) entirely written in WebAssembly. The only parts for which it relies on external (JavaScript) code is the dynamic loader (which isn’t available (yet?) in WebAssembly), and the I/O primitives to read and write a character.

I got a lot of inspiration from jonesforth, a minimal x86 assembly Forth system, written in the form of a tutorial.

The WAForth core is written as a single module in WebAssembly’s text format. The text format isn’t really meant for writing code in, so it has no facilities like a real assembler (e.g. constant definitions, macro expansion, …) However, since the text format uses S-expressions, you can do some small tweaks to make it loadable in a Lisp-style system, and use it to extend it with macros.

So, I added some Scheme (Racket) macros to the module definition, and implemented a mini assembler to print out the resulting s-expressions in a compliant WebAssembly format.

The result is something that is almost exactly like a standard WebAssembly text format module, but sprinkled with some macros for convenience.

The interpreter runs a loop that processes commands, and switches to and from compiler mode.

Contrary to some other Forth systems, WAForth doesn’t use direct threading for executing code, where generated code is interleaved with data, and the program jumps between these pieces of code. WebAssembly doesn’t allow unstructured jumps, let alone dynamic jumps. Instead, WAForth uses subroutine threading, where each word is implemented as a single WebAssembly function, and the system uses calls and indirect calls (see below) to execute words.

While in compile mode for a word, the compiler generates WebAssembly instructions in binary format (as there is no assembler infrastructure in the browser). Because WebAssembly doesn’t support JIT compilation yet, a finished word is bundled into a separate binary WebAssembly module, and sent to the loader, which dynamically loads it and registers it in a shared function table at the next offset, which in turn is recorded in the word dictionary.

Because words reside in different modules, all calls to and from the words need to happen as indirect call_indirect calls through the shared function table. This of course introduces some overhead.

Finally, the compiler adds minimal debug information about the compiled word in the name section, making it easier for doing some debugging in the browser. 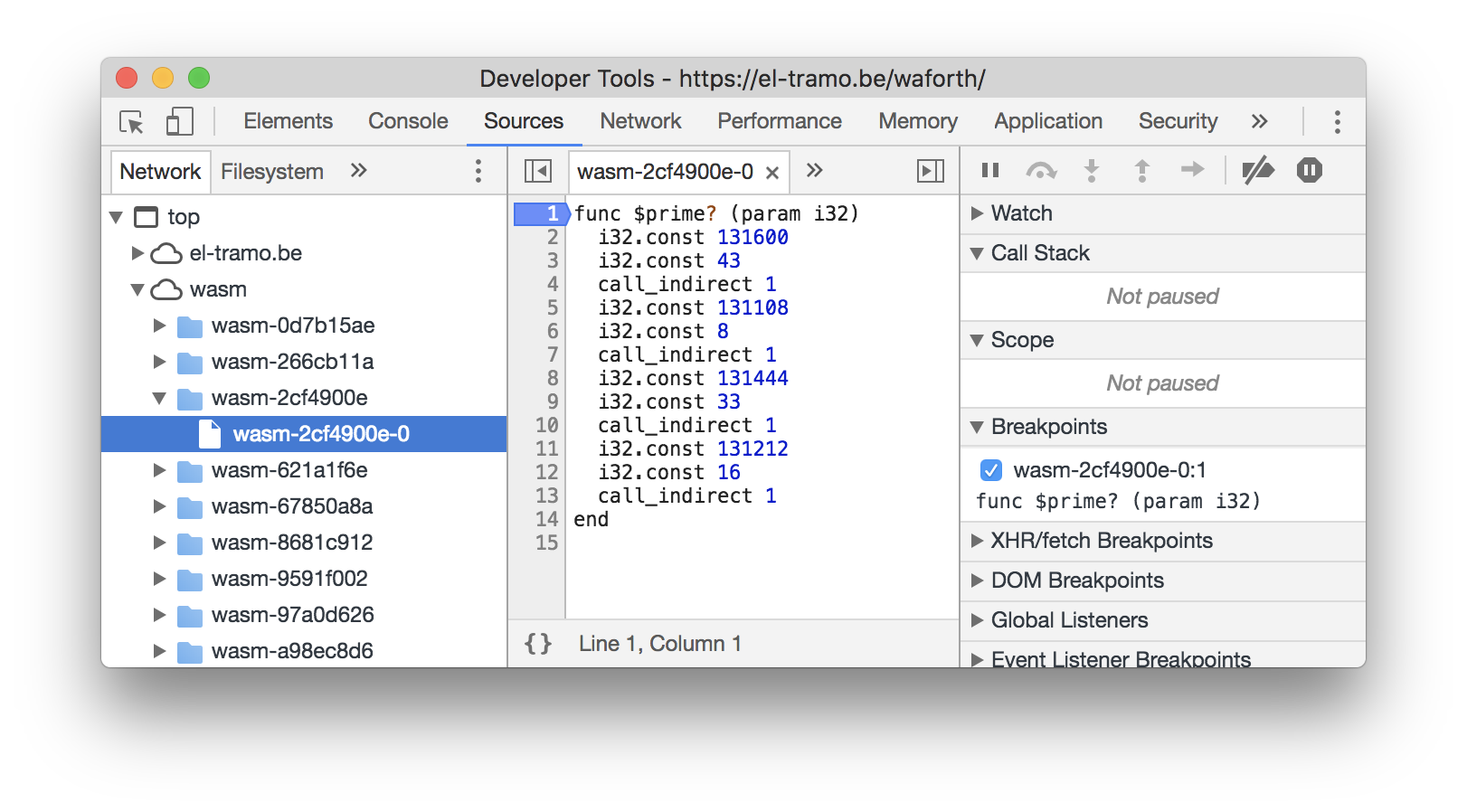 The loader is a small bit of JavaScript that uses the WebAssembly JavaScript API to dynamically load a compiled word (in the form of a WebAssembly module), and ensuring that the shared function table is large enough for the module to register itself.

There’s a small shell around the WebAssembly core to interface it with JavaScript. The shell is a simple class that loads the WebAssembly code in the browser, provides the loader and the I/O primitives to the WebAssembly module to read and write characters to a terminal. On the other end, it provides a run() function to execute a fragment of Forth code.

To tie everything together into an interactive system, there’s a small console-based interface around this shell to type Forth code, which you can see in action here.

Although I didn’t focus on performance while writing WAForth, I still wanted to have an estimate of how fast it went. To get a crude idea, I ran an implementation of the Sieve of Eratosthenes. I let the algorithm compute all the primes up to 90 million on my MacBook Pro 2017 (3.5Ghz Intel Core i7) running Firefox 60.0.1, and timed different systems: 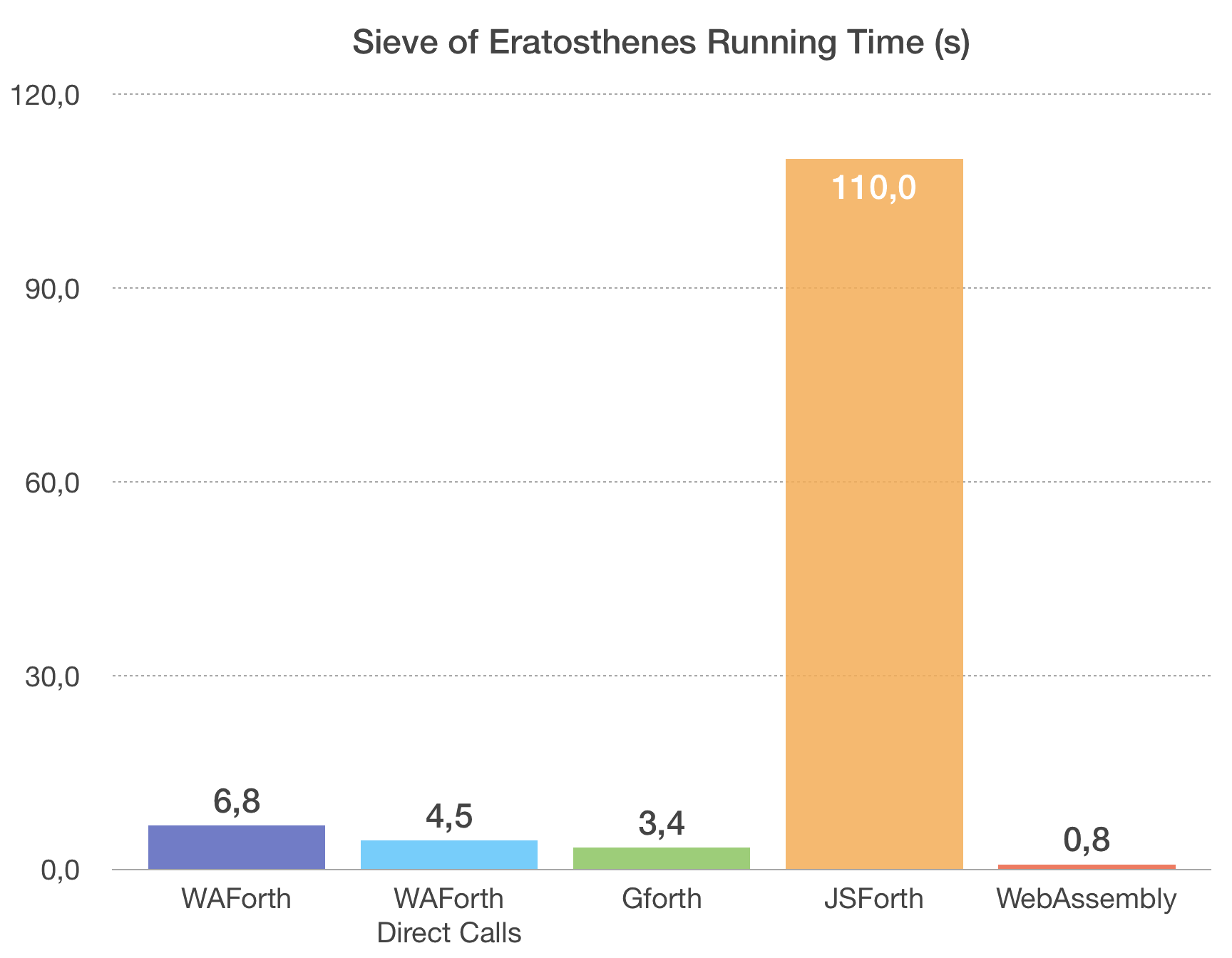 WAForth is still experimental, and lacks support for a few of the ANS core words (although adding support for these shouldn’t be too much work). I also didn’t spend any time profiling performance to see if there are any low-hanging fruit optimizations to be done (although I think most optimizations would complicate the compiler too much at this point).